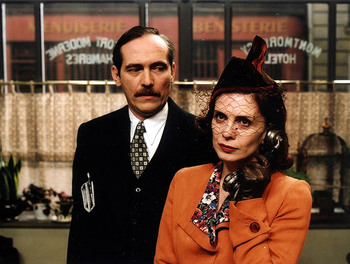 Probably the only espionage yarn in which people sit around in rooms gabbing rather than taking out guns or chasing each other.
— Variety
Advertisement:

Triple Agent is a 2004 French Spy Film, inspired by a true story, written and directed by Éric Rohmer. The then-octogenarian director's second-to-last film, it also marks a rare foray into genre films for him.

1936—Fyodor Voronin (Serge Renko) and his wife Arsinoé (Katerina Didaskalou) live in a Paris apartment. He's a former Czarist general in exile. She's a Greek expatriate, an artist specializing in Slice of Life scenes using real people as models. While Fyodor is ostensibly the chief aide to General Dobrinsky (Dmitri Rafalsky), the head of France's chapter of the Russian All-Military Union

, he's actually a spy, a job for which he is well-qualified, with all of his contacts. The question is, who is he spying for? Is he helping his fellow White Russians keep tabs on the leftist movements popping up in Europe, like in France, where Léon Blum

and his Popular Front have just won the election? Is he helping the Soviet Union keep an eye on the White Russians? Is he helping Nazi Germany keep an eye on the Soviets? He's not very forthcoming about any of this with Arsinoé, despite their loving marriage. As her health starts to worsen, he starts facing serious choices over his future as his political loyalties and personal loyalties start to clash, while Europe starts moving slowly toward another war.