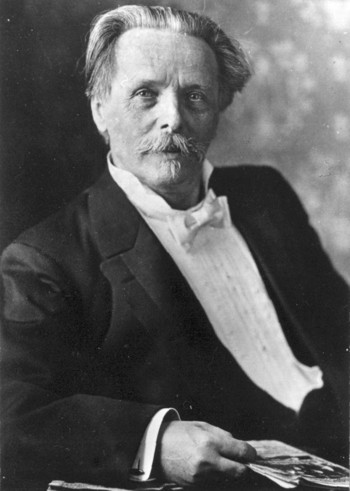 Karl Friedrich May (25 February 1842 – 30 March 1912) was a German author of adventure and travel novels. As a writer he is both one the most read and most translated authors of the German language; it is estimated that 200 million copies of books of his have been sold worldwide, half of them in Germany itself. Currently the edition of his works as produced by the Karl-May-Verlag consists of 94 volumes. He was also something of a modern Münchhausen and a serial Con Man, as he exaggerated, lied and frequently committed petty crimes and fraud (for which he did several stints in prison) along the way. He became quite wealthy from his books and settled down in a big new home, the Villa Shatterhand (now a museum) in Radebeul near Dresden. May probably did more than any other author to influence the particular image Native Americans have in German speaking countries, which is so pervasive that other wiki even has an article

While May also wrote individual novels and series set as far apart as Mexico, South Africa and China, the two most well-known cycles of novels are set in the Orient (which for the purposes of the cycle began in the Balkans and was otherwise more or less congruent with the Ottoman Empire) and in the (Wild) West of the United States, respectively, and have been adapted into two series of films in the 1960s, starting with Der Schatz im Silbersee (1962). While he did not bring The Western to Germany — for that one has to thank James Fenimore Cooper and Friedrich Gerstäcker (1816-1872) — his novels to a large extent defined the way that genre developed in the German-speaking world, notably starting a tradition of sympathizing with Native Americans as much as, if not more than, the white frontiersmen. They are full of noble savages, Mighty Whitey and other tropes that makes many people cringe now, but they can still be enjoyed for the insane attention to detail, even though lots and lots of it was made up. Karl May also wrote novels and stories, often in a more humorous vein, set in rural Germany (e. g. Der Wurzelsepp and Erzgebirgische Dorfgeschichten) and historical adventures set e. g. during The Napoleonic Wars.

In his later years Karl May finally was able to journey to America and the Middle East that he had so vividly described in his books, and developed ambitions of being taken serious as a writer and thinker. His later works (for instance Ardistan und Dschinnistan and Winnetou IV) thus became more esoteric, but these now tend to be read only by the really serious fans. May also became a bit of a pacifist (his final public lecture in Vienna was attended by Bertha von Suttner) and, surprisingly for his time, voiced his disapproval of "Yellow Peril" stereotypes after the "Boxer" Rebellion in China in Und Friede auf Erden ("And Peace on Earth"), despite not having shown Chinese characters in a sympathetic light in earlier works.

Many of Karl May's works have been adapted into other media, especially after his works fell into the public domain in 1962/63, for instance into open-air spectacle dramas, films, comic books, radio plays and television series. Karl May's life became the subject of the films Freispruch für Karl May ("Acquittal for Karl May", 1960) and Karl May (1972, directed by Hans-Jürgen Syberberg). While the books where never actually banned in the GDR, they were much harder to get there and most Easterners only ever got to know his stories through television (West German stations were available in most of the GDR territory with a good antenna), whereas West Germany is now going into its fifth generation of children growing up with his story. The hugely popular Karl May movies (which were - fittingly - shot in Croatia, then part of Yugoslavia) in turn inspired the "DEFA-Indianerfilme" of the east which where similar to the Karl May stories but often claimed to tell historical tales and portrayed the Indians even more sympathetically than Karl May did. Mostly for then current geopolitical reasons. Even more than a hundred years after his death, May's works are still performed in Bad Segeberg (where he never was), Radebeul (where he lived and died) and several other places. Ironically the Bad Segeberg edition is the older one and Radebeul has only really started cashing in on the Karl May craze after the fall of the wall, being in the East and all.

Works by Karl May with their own page include: