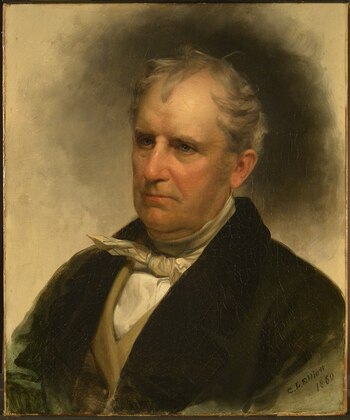 James Fenimore Cooper (September 15, 1789 – September 14, 1851) was a prolific and popular American writer of the early 19th century. Many of his works were historical adventure stories, including the five-volume sequence The Leatherstocking Tales, which includes The Last of the Mohicans, probably the most widely known of his novels.

His works are probably most famous these days for codifying the romantic concept of the Native American Frontier, and for their heroic, chivalrous prose being relentlessly mocked by Mark Twain. (Incidentally, the Defenses are here

.) Nonetheless, Cooper, starting with The Spy: A Tale of the Neutral Ground (1821), became the father of the American novel and wrote the first real American adventure stories. He followed the lead of Sir Walter Scott, adapting it to an American environment and democratizing it: whereas Scott (like Shakespeare) limited his lower-class characters to comic relief roles, Cooper made commoners like Harvey Birch and Natty Bumppo central characters of the work they appeared in. He also instituted an American archetype, that of the misfit or outsider hero at odds with society. The Leatherstocking Tales (1823-1841) are the ancestors of the Western, while The Pilot: A Tale of the Sea (1824) was the first of a series of sea novels based on Cooper's personal experiences in the merchant marine and the U.S. Navy, which established another new literary genre and became direct inspirations for Herman Melville and Joseph Conrad. (He also spent several years living and working in Paris, which may or may not have inspired later American writers). Cooper also wrote some the earliest spy novels and is credited with some of the first serious portrayals of black and African-descended characters in American literature. During his lifetime Cooper was the first American writer to achieve worldwide renown and commercial success, and also the first one to impress and influence European writers, including not only the makers of the European strain of the Western like Friedrich Gerstacker and Karl May, but also Honoré de Balzac, Alexandre Dumas, Victor Hugo and Emile Zola. Johann Wolfgang von Goethe reread The Pioneers before describing a tiger hunt in his Novelle (1826). And while Twain tried to tear him down, Cooper still found admirers of his writing in writers as diverse as Henry David Thoreau, George Sand, Joseph Conrad, DH Lawrence and Arno Schmidt.

Works by James Fenimore Cooper with their own pages include:

Other works by James Fenimore Cooper provide examples of: