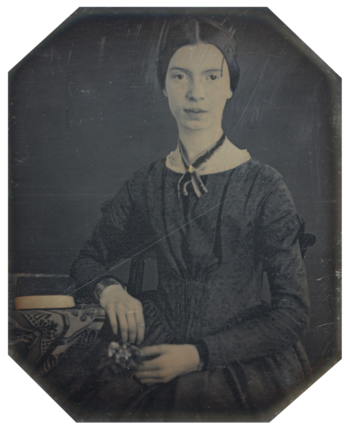 Featured not in her usual white.
There is no Frigate like a Book
To take us Lands away
Nor any Coursers like a Page
Of prancing Poetry –
This Traverse may the poorest take
Without oppress of Toll –
How frugal is the Chariot
That bears the Human Soul –
— Poem No. 1263 (Thomas Johnson-assigned) or 1286 (R.W. Franklin-assigned)
Advertisement:

Emily Elizabeth Dickinson (December 10, 1830 – May 15, 1886) was an American poet. The daughter of a prominent family in Amherst, Massachusetts, she was known in the community for being an eccentric; she rarely left her home and most of her contact with the outside world was through letter correspondence with friends.

Unbeknown to most, she was a prolific poet; indeed, she composed some 1800, though only a dozen were ever published in her lifetime. Much of her work covered themes of faith, death, flowers, and employed unusual grammar and syntax for the day. Because of this, they were heavily edited by anthologies, and after her death, by her family. It was not until nearly half a century later that her works would be published unedited. Today, she is considered one of the most innovative and influential of American poets.

A large amount of her work can be found here

The Woman In White