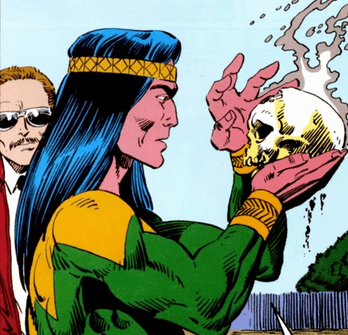 Paris: Isn't there some Indian trick where you can turn yourself into a bird and fly us out of here?
Chakotay: You're too heavy.
— Star Trek: Voyager, "Caretaker"
Advertisement:

A subtrope of Ethnic Magician. Native Americans (or a race meant to be an expy of them) who possess powers because of their ethnicity. Often this involves stating that their power comes from innate spirituality or closeness to nature that "civilized" races don't have. Usually involves influence over nature or animals, or other spirit powers. Quite often, the Native in question will be dressed very "traditionally" even in modern settings. May sometimes speak-um Tonto Talk. Overlap with Badass Native is far from uncommon.

If the Native American magic comes from beyond the grave, see Indian Burial Ground.

This is often a form of Positive Discrimination. Works often use this trope to promote a "positive" image of Native Americans rather than accurately portraying their culture or developing them as characters. Like Noble Savage, this trope can have obvious Unfortunate Implications. While this trope does render Native Americans badass in their own right, it also furthers stereotypes of them as exotic outsiders, and often trivialises deep spiritual traditions as mere fantastical magic in a manner that many real Native people view as disrespectful (compare how Hollywood Voodoo treats the similarly real religion Voudoun).

If this character is a superhero, see Captain Ethnic. See also Magical Negro and Magical Asian. Contrast with Hollywood Natives.

Alternative Title(s): Our Indians Are Different