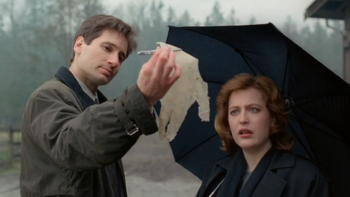 "Mulder, this is so odd. It's almost like a snakeskin that's been shed."
Written by Marilyn Osborn
Directed by David Nutter
"The Tregoes, we realized that Watkins had been attacked by what the Algonquins called the manitou ... an evil spirit capable of changing a man into a beast. To be attacked by a manitou causes the victim to become one."
— Ish
Advertisement:

A Native American boy, Joe Goodensnake, is shot in what looks like a land dispute with local rancher Jim Parker (Donnelly Rhodes) and his son Lyle (Ty Miller). Mulder and Scully are called in to the Trego Indian reservation in Montana to investigate, leading to clashes with the locals who distrust the federal government, including a sheriff (Michael Horse) who was at the Wounded Knee siege in 1973. Between the rancher's story that he mistook the boy for a wild animal, some strange tracks and shed skin found at the crime scene, and local legends about a beast that haunts the wilderness and mauls people, Mulder recognizes links to the original X-file. Could an old Indian legend have taken life again — a Manitou that transforms its host into a raging beast? And what person, human and ignorant by day, hides the Manitou now?