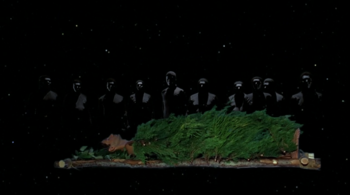 "He will officially be listed as missing until the matter can be resolved quietly."
Written by Chris Carter
Directed by R. W. Goodwin
"In accordance with our ancient traditions, we put for twigs on the beams of the hogan to summon the holy people and tell them that a ceremony will be held. It is called "The Blessing Way" chant. Only the holy people can save the F.B.I. man's life now. He is in their hands."
— Albert Hosteen
Advertisement:

Mulder is nursed back to health by Albert Hosteen's tribe. Scully uncovers evidence that someone in the FBI is working with the conspiracy, and suspects Skinner.

"I came here to give you something. I've got the digital tape."