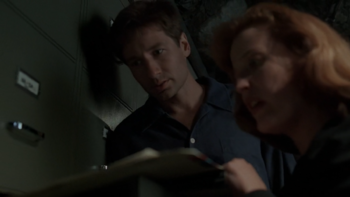 "There are truths out there that aren't on that tape."
Written by Chris Carter
Directed by Rob Bowman
Byers: Are you familiar with a post-World War II project known as Operation Paper Clip?
Mulder: Our deal with the devil. The U.S. government provided safe haven for certain Nazi war criminals in exchange for their scientific knowledge.
Advertisement:

Mulder and Scully are reunited. The former learns about the government's part in the alien hybrid project, and about his father's part in his sister's abduction. Meanwhile, the latter can only hope for her sister's survival after an accidental assassination attempt. But both are being hunted by the CSM's group...

"I've heard the truth, Mulder. Now what I want are the answers."