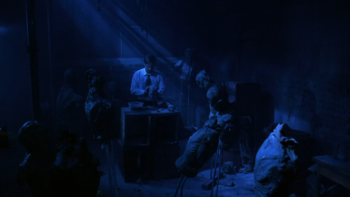 "For over 1200 years, this grotesque image has found its expression in stone, clay, wood, oil and charcoal."
Written by Howard Gordon
Directed by Kim Manners
"Yeah, Patterson had this thing about wanting to track a killer, to know an artist, you have to look at his art. It really meant, if you want to catch a monster, you have to become one yourself."
— Fox Mulder
Advertisement:

A serial killer (Levani Outchaneichvili) claims that he committed his crimes under a demonic influence. More murders are committed while he is in custody, and with the help of Mulder's old Investigative Support Unit mentor Bill Patterson (Kurtwood Smith), Mulder and Scully investigate. Has the gargoyle spirit found a new instrument, or is it the work of a more mundane copycat?

"We are left alone staring into the abyss. Into the laughing face of madness."