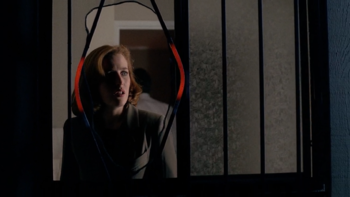 "Any revelations?"
Written by Kim Newton
Directed by David Nutter
Scully: Mr. Jarvis, my religious convictions are hardly the issue here.
Owen: But they are. How can you help Kevin, if you don't believe? Even the killer, he believes.
Advertisement:

A boy suffering from stigmata is targeted by a serial killer. Scully the devout Catholic and Mulder the sceptic of spiritual phenomena swap their usual roles for an episode.

"Sometimes we must come full circle to find the truth. Why does that surprise you?"