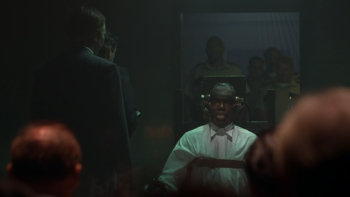 "Tell me who else is on the list, John. Who's next?"
Written and directed by Chris Carter
"Mark my words. Five men will die. FIVE MEN WILL GO DOWN! THIS WILL BE MY JUSTICE! THIS WILL BE MY LAW! THIS WILL BE MY CAPITAL PUNISHMENT, AND NO STAY OF EXECUTION WILL BE GRANTED, FOR THERE IS NO PREJUDICE, NO EVIDENCE TO BE ADMITTED, NO LAWYER WHO DID NOT PERFORM HIS JOB. THESE MEN WILL DIE RIGHTEOUS DEATHS!"
— Neech Manley's last words
Advertisement:

On the day of his execution, death row inmate Neech Manley (Badja Djola) declares that he will be reincarnated and get his revenge on five men who tormented him in prison. Shortly afterward, a guard is found dead in his cell.

Mulder and Scully are summoned to the prison and explore it with the permission of the corrupt Warden Brodeur (J. T. Walsh). Brodeur believes Neech has an accomplice working to kill the people on the list, while inmate John Speranza claims Neech has returned from the dead. Scully is sexually harassed by prison guard Fornier, only for another guard, Vincent Parmelly (Ken Foree) to scare him off. Parmelly tells her that an inmate, Roque (Bokeem Woodbine), knows who is on the list.

Soon after, Fornier’s head is found inside a paint can, prematurely infested with maggots. An autopsy reveals that the maggots are the larva of the green bottle fly. Roque promises to tell Mulder who is on the list in exchange for a transfer. Brodeur discovers Fornier’s headless body inside his office. Mulder and Scully investigate Neech’s cell and discover he was obsessed with reincarnation, to the point of writing a book about it. Mulder believes Neech has reincarnated, while Scully, unsurprisingly, is skeptical. The two talk to Neech’s widow Danielle, who is terrified Neech will kill her for having an affair with Parmelly. She tells them that if anyone could bring themselves back from the dead, it’s Neech. Brodeur has Roque brought to the showers and asks him for the remaining names on the list. When Roque reveals that Brodeur is the final name on the list, the warden spitefully has him beaten to death and puts the prison on lockdown.

Although he believes Neech came Back from the Dead and killed the guards, Mulder decides it was unlikely that he killed Roque, in spite of the fact Roque and Neech once got into a brawl that the guards needed to break up. Mulder asks for the name of Neech’s executioner and he and Scully go to the man’s house, only to find him dead. Mulder confronts Speranza, who tells him that he has seen Neech outside his cell. Scully suspects Neech’s lawyer Danny Charez is behind the murder based in Neech’s phone records. The two question Charez, who reveals Parmelly and Danielle’s affair to them. After they leave, someone who appears to be Neech suffocates Charez.

Brodeur promises to commute Speranza’s sentence in exchange for his help in stopping the murder, and Speranza accepts. Mulder and Scully suspect Parmelly, a recent transfer with a Mysterious Past, could be behind the murders and stake out Danielle’s house to spot him. They eventually leave to notify Brodeur after Parmelly arrives, who tells them to arrest him. Danielle, already spooked from Mulder and Scully’s stakeout, begins to suspect Parmelly is a resurrected Neech. As Mulder, Scully, and several cops arrive, Danielle shoots Parmelly dead. Brodeur assumes Parmelly was on the list and has Speranza beaten to death in the showers; Speranza claims that there is one more person on the list before dying. Mulder and Scully drive away, but Mulder pulls over and notes that Parmelly could not have committed all of the murders, since he was only on duty during one murder and could not have known the executioner’s identity. Scully convinces him to let it go, and Brodeur drives past them. Brodeur’s car is filled with flies, and Neech appears in the backseat. Neech attacks the warden and causes the car to crash into a tree, killing Brodeur. Neech disappears from the car, his revenge complete, and a fly lands on the corpse of the warden.