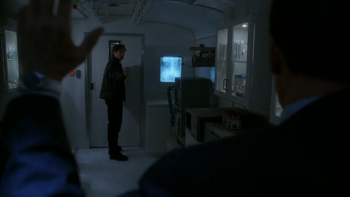 Apology is Policy
Written by Frank Spotnitz
Directed by Rob Bowman
Scully: Mulder, if that bomb detonates, thousands of people are going to die of hemorragic fever. That's what the test subject inside has been exposed to.
Mulder: Well, Scully, you're a little late. I'm locked inside that train car.
Advertisement:

Mulder explores a rail car used for secret experiments. Scully investigates the purpose and history of her alien implant.

"I want an apology for the truth."