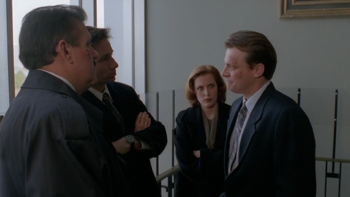 "He is just a little man who wishes that he were someone big... and, and, we're feeding that wish."
Written by Vince Gilligan
Directed by Rob Bowman
"But the mechanism of suggestion is the same. It's just a lot more powerful in this case. I mean, this guy calls himself 'Pusher'. Can't we take that to mean that he pushes his will onto other people?"
— Fox Mulder
Advertisement:

Mulder hunts a hitman with the power to psychically "push" people into obeying his commands.

"I say we don't let him take up another minute of our time."