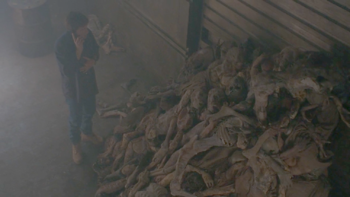 éí 'aaníígÓÓ 'áhoot'éTranslation "The truth is far from here" in Navajo.
Written by David Duchovny (Story) & Chris Carter (Story & teleplay)
Directed by R. W. Goodwin
"There was a tribe of Indians who lived here more than 600 years ago. Their name was Anasazi, it means ancient aliens. No evidence of their fate exists. Historians say they disappeared without a trace. They say that because they will not sacrifice themselves to the truth."
— Albert Hosteen
Advertisement:

Mulder receives a tape containing encoded information about alien visitations, which leads him and Scully to New Mexico.

"Nothing vanishes without a trace! Burn it."