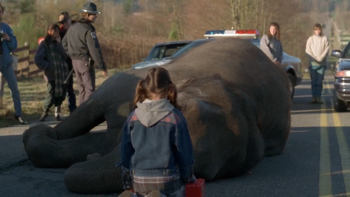 "This is a perfect example of man's imperialism over the animal kingdom - this craven impulse to turn animals into objects for our own selfish pleasure."
Written by Steve De Jarnatt
Directed by James Whitmore, Jr.
Willa: Aliens impregnating zoo animals?
Mulder: Yes, and harvesting the embryos.
Willa: Why?
Mulder: Maybe their own Noah's ark? To preserve the DNA of these animals that we're depleting to extinction.
Advertisement:

A man is found trampled to death - apparently by an invisible elephant. When the body of the elephant is discovered some 45 miles away - and discovered to have been recently pregnant - Mulder and Scully follow the trail to the local zoo. Amid intrigues involving animal rights activists and the Malawi government, animals continue to disappear and reappear. Is this the work of human zealots or alien breeding programs? And could the answers lie with the only witness to the disappearances - a gorilla named Sophie?

Not to be confused with Fearful Symmetry.

"Will man save man?"