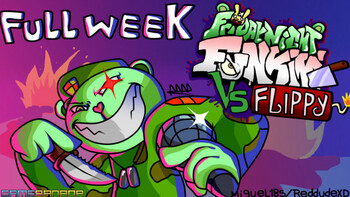 Yikes, and he's flipped out too. You better run!
Vs. Flippy is a Friday Night Funkin' Game Mod created by miguel185 and ReddudeXD. The mod features Flippy, a very well known character from the web-animated series Happy Tree Friends.
Advertisement:

In the colorful Sugar Bowl that is the forest from said cartoon, Boyfriend and Girlfriend encounter Flippy, who has seemingly flipped out and become his alter ego, Fliqpy. However, it does not stop Boyfriend from challenging him to a rap battle. He's lucky that the shell-shocked green bear would spare him...

note The mod is in the process of being remastered.

Not to be confused with Flipped Out, which also stars the aforementioned green bear.