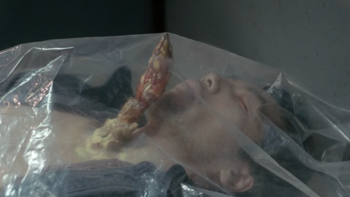 "Our meddling intellect misshapes the beauteous forms of things we murder to dissect."
Written by Howard Gordon
Directed by David Nutter
Mulder: He discovered the spore in the samples Firewalker brought up.
O'Neil: He would have told us.
Mulder: Not if what he discovered was too disturbing even for him to understand.
Advertisement:

Mulder and Scully investigate mysterious events at a scientific project using a robotic probe, "Firewalker", to explore the interior of a volcano.

"And of the events that occurred at Mount Avalon between the 11th and 13th of November, 1994, mine stands as the only record."
Feedback