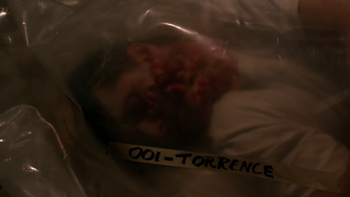 "The F. Emasculata is a parasitoid, a bug that carries a parasite. In this case, a deadly parasite that attacks the immune system."
Written by Chris Carter & Howard Gordon
Directed by Rob Bowman
Cigarette Smoking Man: What is the exact nature of the contagion?
Mulder: It's deadly. It kills within thirty-six hours. One escaped convict was infected. He's dead now. The other man may be infected and he's on the loose.
Advertisement:

Mulder and Scully investigate after a virulent tropical disease is introduced into a prison by an infected parcel. The situation is complicated by the escape of two potentially infected inmates.

"I'm saying this as a friend. Watch your back. This is just the beginning."