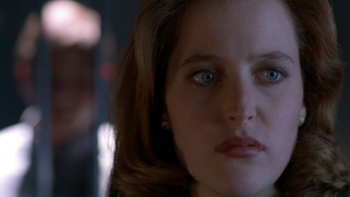 "Exposures like these can leave you extremely vulnerable."
Written by Chris Carter
Directed by David Nutter
"His victim was a young attractive woman. The corpses he dug up were those of young women. Yet there's no evidence of any sexual activity. What fuels his need? What is important about the hair and fingernails to him?"
— Fox Mulder
Advertisement:

When a girl's body is found exhumed and mutilated, local law enforcement suspects aliens and calls in the FBI. Although Mulder's interest in the case consists primarily of a pair of convenient football tickets, he gets a chance to use his skills as a profiler tracking a death fetishist turned serial killer (Nick Chinlund). And his next target may be Agent Scully...