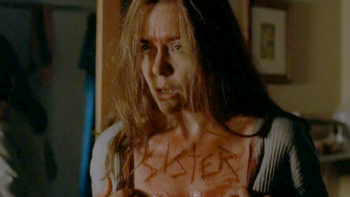 "Did their home life mold them into creatures that must maim and kill, or are they demons from birth?"
Written by Sara B. Charno
Directed by Rob Bowman
Mulder: Well, I'd like to know why this policewoman would suddenly drive her car into a field the size of Rhode Island and for no rhyme or reason dig up the bones of a man who's been missing for fifty years. I mean, unless there was a neon sign saying "Dig Here"...
Scully: I guess that's why we're going to Aubrey.
Advertisement:

When a female police officer, BJ Morrow, starts displaying preternatural knowledge of a set of 50-year-old serial killings, Mulder theorizes some kind of clairvoyance. But when new victims start turning up, it seems that something far more sinister is going on. Has a 74-year-old serial killer resumed his old activities? And what is BJ's connection to the case?

"Evidence suggests the presence of a mutator gene that has activated previously dormant genes, but the results so far are inconclusive."