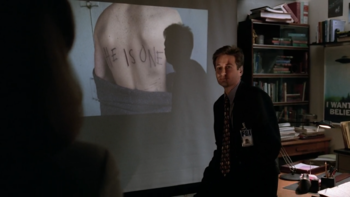 "The other victims have had to be sedated and hospitalized since their ordeals. They were reportedly hysterical with fear."
Written by Chris Carter
Directed by Win Phelps
Mulder: Have you ever had any dealings with anyone from the Church of the Red Museum?
Gary: I've seen them around.
Mulder: Do you have any reason to believe that they may be involved with what happened to you?
Advertisement:

The teenagers of a small cattle-ranching town have been disappearing, only to be found stripped and wandering the nearby woods, marked with the phrase "He Is One." Local authorities suspect the Church of the Red Museum, a vegetarian cult that has recently taken up residence. When one of the teens is found dead, however, the toxicology report reveals an unknown substance—one that Scully recognizes from a certain Erlenmeyer flask. Could the town be the staging ground for a sinister government experiment?

"The case remains open and unsolved."