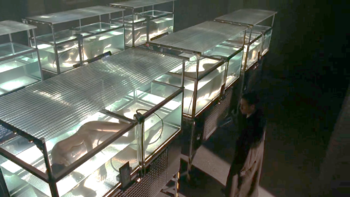 "Trust... no... one."
Written by Chris Carter
Directed by R. W. Goodwin
Scully: What exactly did you find?
Dr. Carpenter: A fifth and sixth DNA nucleotide. A new base pair. Agent Scully, what you are looking at... it exists nowhere in nature. It would have to be, by definition... extraterrestrial.
Advertisement:

A car chase in Maryland ends with the fugitive overpowering several officers, bleeding green blood, and disappearing into the water. When Deep Throat points Mulder to the case, he and Scully find themselves investigating. Scully doesn't trust Deep Throat, but both she and Mulder find themselves led to a gene therapy experiment of possibly extraterrestrial origin, as well as government spooks looking to cover it up at any cost.