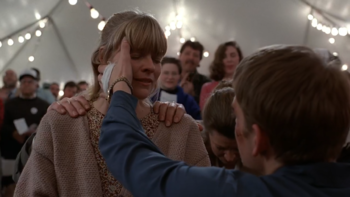 "Pray with me."
Written by Chris Carter & Howard Gordon
Directed by Michael Lange
Rev. Hartley: But I say to you that what the doctors cannot cure, the Lord can.
Crowd: AMEN!
Rev. Hartley: Yes, indeedy, praise God! Because God can work miracles. Today the clear light of God's healing love is flowing through Samuel's healing hands.
Advertisement:

Ten years ago, Calvin Hartley's adoptive son Samuel raised a man, Leonard Vance, from the dead after a car crash. Now, the three of them run a faith-healing tent ministry. When one of the people Samuel heals goes on to die soon after, Mulder and Scully are called in to investigate. They find Samuel to be a mess of guilt, feeling that his power has been corrupted as punishment for wavering from the straight and narrow, while convincing Mulder that he's the real deal by telling him about his lost sister Samantha. Meanwhile, they encounter hostility from the townspeople who follow the Hartleys — and a seemingly sympathetic voice in Sheriff Daniels, who believes that the Hartleys are frauds.

"I think people are looking hard for miracles ... so hard that maybe they make themselves see what they want to see."