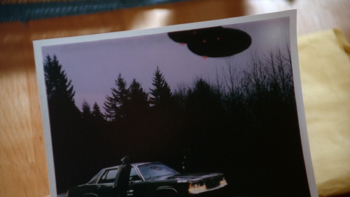 Appearances can be deceptive.
Written by Glen Morgan & James Wong
Directed by William Graham
"I am determined to follow a lead that may result in proof of the existence of extraterrestrial biological entities. I need to go."
— Fox Mulder
Advertisement:

Near the border between Iraq and Turkey, an Iraqi fighter pilot shoots down a UFO. Later, a truck driver in Tennessee named Ranheim sees another UFO, and starts shooting in the dark. Mulder and Scully investigate the sighting, but are turned away, causing them to turn to the Lone Gunmen, a trio of conspiracy theorists that Mulder is friends with. Meanwhile, Deep Throat informs Mulder of the Iraqi UFO incident.

Investigation of Ranheim's truck reveals discrepancies in his cargo, causing Mulder and Scully to attempt to track it down. After putting up with some attempted manipulation from Deep Throat and attempts to spy on them, they track down Ranheim and his truck in Washington state, finding out that he was transporting the UFO's pilot (an "extraterrestrial biological entity", or an E.B.E.) to the town of Mattawa, Washington.

Here, Mulder and Scully infiltrate the power plant where they believe the E.B.E. is being held. There, they learn from Deep Throat that, after the Roswell crash, the world's great powers made a secret agreement to destroy any live extraterrestrials. Deep Throat himself is one of three people who personally killed an alien, and his guilt over doing so is part of the reason why he is helping Mulder and Scully. He then lets them go free.