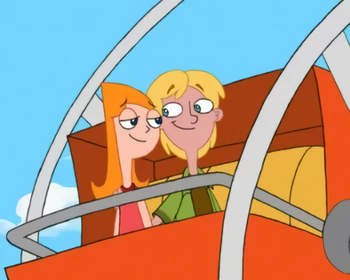 Love is in the air...
"You'll never know how great a kiss can feel,
'til we stop at the top of a Ferris Wheel..."
— Palisades Park, Freddy Cannon
Advertisement:

No date at the Amusement Park, whether planned or unplanned, "Just the two of us" or "Let's all go together", is complete without a ride on the Ferris Wheel. In most Shoujo animes with such a date, the Ferris Wheel is the replacement for the often cliché Tunnel of Love: the cars only seat two people at a time, are perfectly private with no chance for interruptions, provide a romantic view of the city and amusement park lights, and encourage that now or never moment for the couple to share their feelings for each other.

The scenes are easily predictable, based upon the viewers' current knowledge of the characters and plot from previous episodes/chapters. Some recurring examples:

Not to be confused with the Ferris Wheel of Doom, or eating a date while on a ferris wheel.

Be advised! This trope generally occurs at the end of an episode/chapter/series and may spoil a Relationship Upgrade or Happily Ever After for you!

Kyle takes Dani out on a date where they ride on a secluded ferris wheel, where they share a tender moment and give each other comfort.

Kyle takes Dani out on a date where they ride on a secluded ferris wheel, where they share a tender moment and give each other comfort.