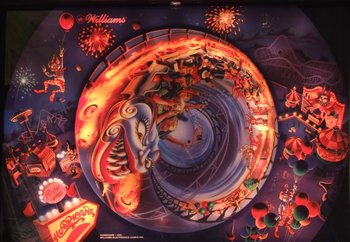 Hurricane is a Physical Pinball Table designed by Barry Oursler with art by Python Anghelo and John Youssi. It was released by Williams Electronics in 1991.

As before, this pinball takes players to an Amusement Park filled with clowns, carnival games, clowns, rollercoasters, and clowns. Knock down the plush cats and duck targets for prizes, then shoot the Juggler to lock the ball or a Mystery Score. Hit the Dunk Tank Dummy, ride the two Ferris Wheels, then go by the Palace for the Palace Jackpot and free Fanservice. For the biggest thrills, ride the Comet and Hurricane rollercoasters, then light up the clown's face for the Clown Time frenzy — but don't get sick when the Hurricane hits the corkscrews on the backglass...

This was the final table in Williams' "rollercoaster" series of pinballs, after Comet and Cyclone. While the first two games were widely popular for their uncomplicated gameplay and thrill ride themes, Hurricane is more divisive, with detractors turned off by the overly complicated rules, flow-breaking ferris wheels, and heavy emphasis on clowns. On the other hand, its supporters praise its strategy-oriented design, particularly the need to master multiball for the best scores.

On February 19, 2016, FarSight Studios released a digital version of Hurricane for The Pinball Arcade. It remained available until their license to all Bally and Williams tables expired on July 1, 2018. Another digital version would eventually be released by Zen Studios as part of Volume 4 of their Pinball FX3 Williams Collection.

Has no relation to Whirlwind.