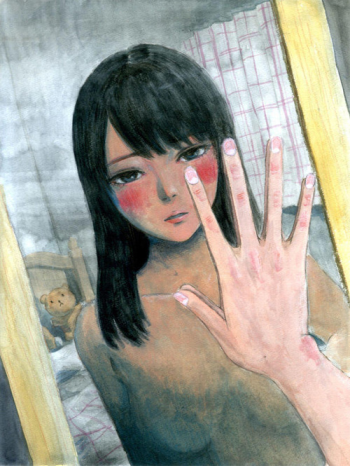 Inside Mari (Boku wa Mari no Naka) is a manga by Shuzo Oshimi (author of The Flowers of Evil), which ran in Manga Action from 2012 to 2016.
Advertisement:

The manga tells the story of Isao Komori, a recluse shut-in with no social life whatsoever who spends most of his time playing video games. He is also in love with a young schoolgirl he usually sees when he goes to the convenience store to buy food, but since he is too shy to talk to her, Isao prefers to stalk her while she is walking home. Then, one day, he suddenly finds himself in the body of Mari Yoshizaki, the very girl he is so fond of stalking.

The story deconstructs body swap stories by showing that an actual body swap would probably be utterly terrifying to the victims.

Inside Mari can be read on Crunchyroll

Inside Mari provides examples Of: