Manga / Science Fell in Love, So I Tried to Prove it 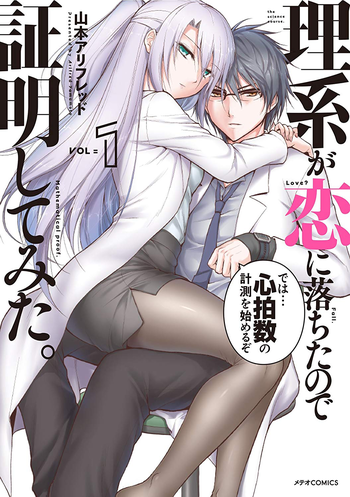 Two geniuses with no awareness for love
Advertisement:

One day, Saitama University Information and Computer Science students Ayame Himuro and Shinya Yukimura are bickering as normal when Himuro drops a bombshell on her male colleague:

However, no self-respecting science-type can let such a statement stand unanswered and unproven, so Yukimura poses the question of how one defines "love", and what evidence Himuro used to determine she was in love with him.

Thus begins Science Fell in Love, So I Tried to Prove it (Rikei ga Koi ni Ochita no de Shoumei Shite Mita) a story in which a pair of Spocks attempt to answer the question What Is This Thing You Call "Love"? through the scientific method, all while dealing with the very feelings they are trying to prove they have for each other.

The manga began serialization in the shonen magazine Comic Meteor in 2016, and is still ongoing. It received a twelve episode adaptation from anime studio Zero-G that premiered on January 10th, 2020. The second season is set to be part of the Spring 2022 season.

A 4-episode Live-Action Adaptation aired in September 2018, starring Nana Asakawa and Shun Nishime as Ayame and Yukimura, respectively. This was followed up with an hour and a half long movie in February 2019.

Science Fell in Love, So I Tried to Prove it provides examples of: