Due to its nature as a sequel, spoilers for the original Persona 5 are left unmarked. You Have Been Warned! 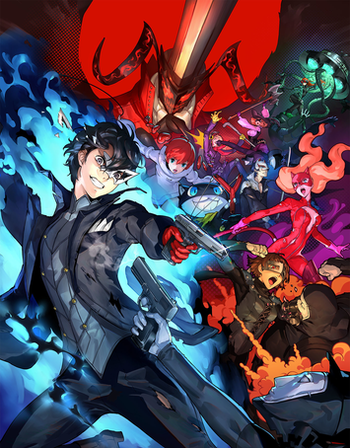 Persona 5 Strikers (known as Persona 5 Scramble: The Phantom Strikers in Japan) is a Dynasty Warriors-style Action RPG sequel to Persona 5, developed by Atlus and Koei Tecmo's Omega Force, and published by Atlus for the PlayStation 4, Nintendo Switch, and PC via Steam. It was released in Japan on February 20, 2020, in Asia and South Korea on June 18 the same year, and in Western territories with an English dub on February 23, 2021, with an early release date of February 19 for the digital deluxe edition.

Set half a year after the end of Persona 5, the now-retired Phantom Thieves of Hearts' plans to enjoy their summer vacation together must be put on the backburner when Joker, Morgana, and Ryuji stumble upon a strange incident involving a massive Change of Heart event in Shibuya. To make things worse, a police inspector named Zenkichi Hasegawa reveals to them that Change of Heart incidents have been occurring all over Japan, with all fingers from the police pointing towards the Thieves as the primary suspects. Making a deal with Zenkichi — who himself believes the Thieves are innocent — to assist in his investigation after having regained the power of their Personas, they set out on a road trip across the country to figure out the cause behind these events.

Strikers mixes Dynasty Warriors-style hack-and-slashing with the RPG systems of previous Persona games, translating many of the turn-based gameplay elements of Persona 5 into a real-time combat setting. Characters combine melee combos with attacks from their Personas in tandem, and can pause the action to cast Persona skills. Persona fusion returns, allowing Joker to wield a vast array of Personas that alter the properties of his moveset. Strikers also significantly breaks away from the Dynasty Warriors formula to bring its gameplay closer to Persona 5, with generally-smaller enemy counts, minor stealth elements, and P5-style dungeon crawling rather than large battlefields. Outside of said dungeon crawling, Strikers retains many of Persona's daily life segments and calendar system, allowing Joker to explore cities and chat with his friends.

Even when your arrested, you can still be a badass. Zenkichi proves it.

Even when your arrested, you can still be a badass. Zenkichi proves it.