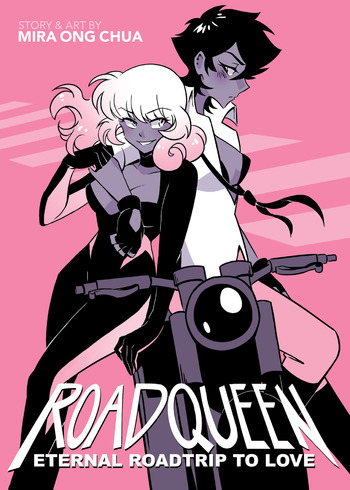 SHE CAN STEAL THE HEART OF EVERY GIRL...EXCEPT THE ONE WHO STOLE HER BIKE!
Advertisement:

Leo's the hottest senior at Princess Andromeda Academy, and her adoring fangirls have one goal: to beat her in a road race so she'll go out with them. Unfortunately, the only thing Leo loves more than breaking hearts is her faithful old motorcycle, Bethany. But the arrival of mysterious new girl Vega upends her daily routine forever.

Now it's graduation season, and with her beloved motorcycle gone, Leo finds herself facing a lonely summer at an all-time low...until mysterious beauty Vega comes crashing back into her life. The two strike a deal that puts Leo's bike - and dignity - on the line. Will Leo rise to the occasion, or lose Bethany forever? What's Vega's deal, anyway? And what's this burning feeling in both of their hearts???

Roadqueen started as a one-shot comic by Mira Ong Chua released digitally in 2016, originally titled Roadqueen: Girlfriend of the World. In 2018 Chua announced a sequel to Roadqueen, and after a very successful Kickstarter campaign,

the book was released digitally in December of that year. In the full comic, the original one-shot was retooled into a prologue chapter to the main story, which takes place about a year later.

The Seven Seas edition was released on October 8, 2019.