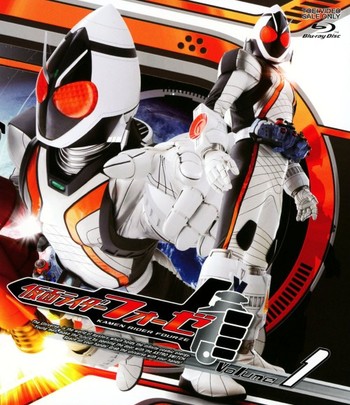 UCHUU KITAAAAAAA!!note Translation: IT'S SPACE TIIIIIIIIIIME!/SPACE IS HEEEEEERE!
"Space...a wondrous world, filled with infinite cosmic energy. Using the Astro Switches, these young people will open the door to the future of space. Space on your hand! Reach out and seize the universe!"
—Opening Narration
Advertisement:

Amanogawa High School is a school that encourages every one of its students to be themselves, creating a diverse (but chaotic) student body. Arriving into this bedlam is New Transfer Student Gentaro Kisaragi, a cool guy with a Delinquent image who immediately vows to become friends with every single student in the school.

When the school is attacked by mysterious monsters named Zodiarts, Gentaro receives the Fourze Driver and Astro Switches from fellow students Kengo Utahoshi and Yuki Jojima. Using their power, he transforms into Kamen Rider Fourze to protect the students of Amanogawa High. Fourze can equip up to four Astro Switches at once, using them to equip attachments onto his arms and legs that boost his combat potential.

The plot's main driving element is Gentaro's goal in making friends with everyone in the school, even the Zodiarts Switchers. As such, many of the characters learn important life lessons from Gentaro as he tries not only to fight monsters, but also to befriend them and save them from themselves. The Zodiarts themselves show parallels to the darker sides of humanity and with each one that appears, it becomes harder and harder to free them.

Aired alongside Super Sentai shows Kaizoku Sentai Gokaiger and then Tokumei Sentai Go-Busters, with the cast meeting those of both in Super Hero Taisen, in the Super Hero Time block.

Voted #16 series in the Heisei era, and #23 product overall in NHK’s All Kamen Rider Popularity Ranking.

"Switch on the youthfulness!"
Feedback

To the Rabbit Hutch

In order to get to their base on the moon, members of the Kamen Rider club pass through a transporter concealed in an ordinary school locker.

To the Rabbit Hutch

In order to get to their base on the moon, members of the Kamen Rider club pass through a transporter concealed in an ordinary school locker.