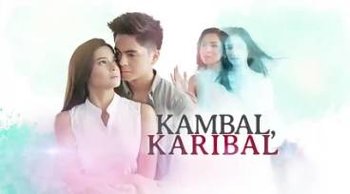 Kambal, Karibal (literally "Twin, Rival", International Title: Heart & Soul) is a Filipino drama television series with supernatural elements directed by Don Michael Perez and is broadcasted on GMA Network. The main leads include Bianca Umali, Kyline Alcantara, Pauline Mendoza and Miguel Tanfelix. It aired from November 27, 2017 to August 3, 2018 with a total of 178 episodes.

The story is centered on the twins Crisanta (Crisan) and Criselda (Crisel) who got their family ripped apart by their mother's psycho suitor Raymond de Villa (played by Marvin Agustin) who led their parents to believe that they died in infancy when in fact they were given to Raymond's cousin Teresa and her husband Noli, who raised the twins. The twins grow up to be fond of each other and become practically (and later literally) inseparable. Later Crisel dies of a rare disease but stays with her twin Crisan as a spirit. Then, Diego comes along and Sibling Rivalry ensues. Their quest to be with their true parents, deal with Cheska and Raymond de Villa, try to make up with each other (which usually fails) and fight for Diego's affections make up most of the show's plots.