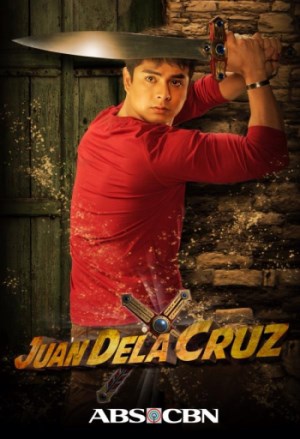 Juan dela Cruz is a Philippine television drama directed by Malu Sevilla. Juan dela Cruz was first aired on February 4, 2013 on ABS-CBN and international network TFC and is the second Filipino series to broadcast and filmed in high definition. The series was produced by Dreamscape TV.

The series follows the story of Juan dela Cruz (Coco Martin), an orphan child who was raised in a church in a town by Catholic parish priest. After the priest was killed by a thief, Juan was taken care of by the priest's sister in the city. Unknown to Juan he was a half-aswang, the son of the Haring Aswang and the prophesized Anak ng Dilim who is fated to lead the aswangs to dominate over the humans. However his mother is a Tagbantay (lit. "Guardian") and a human. The Tagabantay is tasked to defend the humans from the dreaded aswangs and as the son of the Tagabantay, Juan is set to take over his mother's role when he grows up.

When Juan grows to be a young adult, Juan joins the Kapatiran (lit. "Brotherhood"), a vigilante group whose goal is to destroy the aswangs, to train as the next Tagabantay. Later on the story, a race of fairies, the Engkantos and the Diwatas comes to help Juan in his task which seems to have a bigger role on the long-lasting conflict between the aswangs and the humans.