In the End, You Are on Your Own 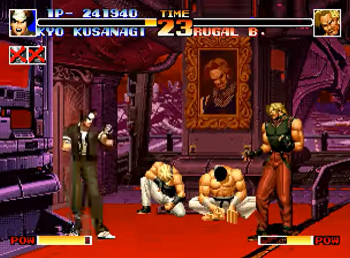 There's only room for one in the final battle.
Angelus: That's everything. No weapons, no friends, no hope. Take all that away, and what's left?
Buffy: [Bare-Handed Blade Block] Me.
— Buffy the Vampire Slayer, "Becoming, Part 2"
Advertisement:

As a Stock Aesop, believing in The Power of Friendship over isolationist self-reliance is pretty standard and true. There's a lot a group can accomplish that the individual(s) acting on their own can't. In fiction, Friendship even brings tangible benefits like The Team developing an Attack Pattern Alpha which uses All Your Colors Combined. Some shows go the extra length to crush the message into a viewer by having a Sixth Ranger fail miserably and join the team. Once the Season Finale rolls around however, The Hero can't depend on his weaker friends to keep up, and will have to fight the Big Bad Final Boss on their own.

Many shows will switch gears abruptly to have the hero fight the last battle on their own. Be it due to a Climactic Battle Resurrection waylaying all their allies, killing them all, or because the enemy is so strong anyone trying to help the hero would become a meat shield at best and a dangerous distraction at worst. This limits the rest of the cast to cheering from the bleachers (maybe slapping some sense into a hero woozy from a Breaking Speech) or acting as fuel for a Combined Energy Attack or Super Mode.

Some stories work this into a narrative organically. The Big Bad may cleverly isolate the hero from his friends via framing him or capturing them (and force them to watch him kill their leader). Sometimes the villain is not involved and This Is Something He's Got to Do Himself. In these cases, the value of friends isn't in their tangible help fighting but by placing their trust in the hero's success and motivating them to do their best. Trust is a powerful force like that.

Compare Duel Boss (who is not necessarily the Final Boss, as per this trope) and Door Jam. Contrast I Can't Do This by Myself. See also What You Are in the Dark. If just one person manages to remain with the Hero, see Loser Has Your Back. The Rest Shall Pass may invoke this, if the Hero leaves the rest of the bad guys to be fought by his party. Not to be confused with Dying Alone. Sub-Trope of Solo Sequence.