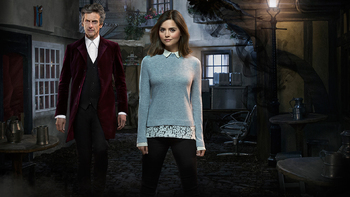 Who will face the raven?note Perhaps the person in the centre of the frame?
Click here to see the Radio Times magazine poster for this episode: 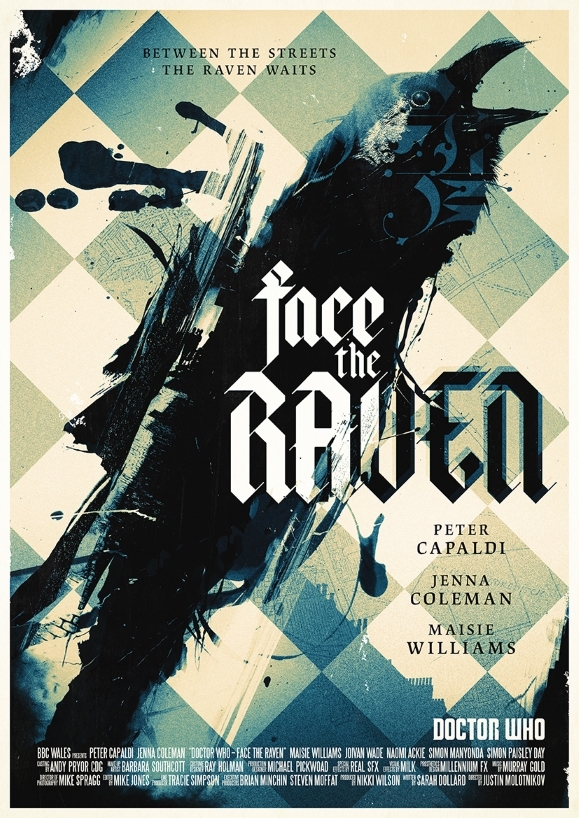 The one where Clara went the way of Lenore... doomed to the fate of NEVERMORE.

, with Clara Oswald's fate the turning point of the entire season.

The Doctor and Clara have just been banished from the second-most-beautiful garden planet in the universe, possibly because Clara saved the Doctor from having to marry a sentient plant, when the TARDIS phone rings. Clara answers it, and it's Rigsy. She'd given him the Doctor's number for emergencies, and he think's he's got one — he's mysteriously acquired a tattoo on the back of his neck. A tattoo of numbers, counting down.

The Doctor and Clara arrive in Rigsy's flat, and meet his baby daughter Lucy, whom the Doctor coos over. Rigsy doesn't remember the previous day at all. According to his girlfriend, he left before dawn, and came home after midnight, and the screen of his phone is now cracked. The Doctor is seriously alarmed at the sight of Rigsy's tattoo, and he is invited aboard the TARDIS, but told to leave the "new human" behind, because the Doctor might get distracted by the adorableness of said "new human".

The tattoo means that Rigsy is going to die. That's what it's counting down to. A scan from the TARDIS reveals he's been dosed with Retcon, an amnesia drug. His phone has been wiped, but the TARDIS will be able to recover the information. The Doctor has a suspicion about where Rigsy was, and off they head to the British Library to look at maps. Why? Because it looks like Rigsy was lured to a "trap street" — a secret hideout for aliens, hidden by means of something called a "misdirection circuit" and tucked in-between the ordinary streets of London.

The Doctor flies a search pattern over London, with Clara leaning out of the TARDIS' doors wearing the sonic sunglasses. The glasses will register any place below that her eyes couldn't focus on. She nearly falls out at one point, and Rigsy is disturbed by how not-bothered she was at the prospect of falling to her death.

Armed with a map of the places Clara couldn't focus on, the trio sets to walking the streets of London counting their footsteps, looking for the trap street. When they are initially unsuccessful, Clara is sent back to the TARDIS to fetch some of the Doctor's most annoying stuff. She instead finds that the TARDIS has recovered the information on Rigsy's phone, and brings that back instead. He got a phone call early in the morning the day before, the call that lured him to the trap street. Moments later, they find the street, and enter. The Doctor tells Rigsy to put his hood up, as he's likely known to the residents.

On entering, the trio is caught by a security system, and met by a pair of guards, both aliens, but made to look human by the misdirection circuit. When the guards find out that Rigsy is back, they are not pleased. Shortly, the mayor of the street arrives, drawn by the disturbance. It's Ashildr, back to calling herself "Me". The Doctor had lost track of her in the 1800s, and this is what she's been doing. She allows them entry, but tells them that the residents of the street won't be happy to see Rigsy, as he has been accused of murder.

Ashildr is the one who put the mark on Rigsy. It's a chronolock, put on by an entity called a quantum shade, which she has a contract with. All crimes in the street are punished the same way. Rigsy is accused of murdering a Janus woman named Anah, because he was found at the entrance to the street, standing over her body. Clara and the Doctor don't believe him guilty, but the residents of the street do.

It's a race against time to prove Rigsy's innocence... and find out what Ashildr's really up to...