Video Game / The King of Fighters '94 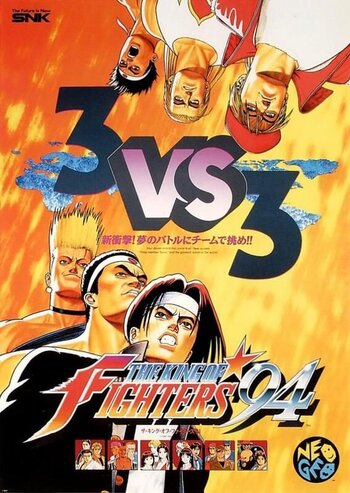 "We are opening
King of Fighters
Following the time honored custom.
This year, we will adopt a special rule
Of competition between teams of 3 fighters
That's all..."
-[R]
Advertisement:

The 1994 King of Fighters Tournament is under way, with a mysterious new sponsor to boot. Twenty four fighters from around the world gather in teams of three to compete for the eponymous title, all while something darker festers in the shadows.

The cast of fighters features both original characters and fighters from across other SNK series including Fatal Fury, Art of Fighting, Ikari Warriors, and Psycho Soldier. This is also the debut of KOF's Original Generation protagonist, Kyo Kusanagi, and his long-standing partners, Benimaru Nikaido and Goro Daimon, as well as the legendary SNK Boss Rugal Bernstein.

In terms of gameplay, it can be said KOF '94 is a mashup of Fatal Fury, Art of Fighting, and Samurai Shodown, as all of their fighting systems can be found here. Both the evasion move and the strong "Blow Back" attack from Fatal Fury are here, so are the quick dash and the power gauge from Art of Fighting. Maxing out the gauge gives your move an extra damage boost, just like Samurai Shodown. Then there's KOF's own innovation – introduced in this title was the series' signature 3 Vs. 3 system, as opposed to the classic 1 Vs. 1 format. Players have to select a team of three fighters, each with a different set of Special Moves, and each round is won by defeating a different fighter from the opponent's team. Understanding the dynamics between all these characters, as well as picking a proper order to send them in a match, has remained integral part of the series ever since.

In 2004, a remake was release called The King of Fighters '94: Re-Bout for the PlayStation 2, which retroactively added Team Edit to the game, along with new 3D stages, upscaled sprites and the addition of Saisyu Kusanagi to the roster. The original game can also be played on modern consoles as part of the ACA Neo Geo lineup.

Teams in this game
Advertisement:

Thorgi [The King of Fighter Retrospective (Orochi Saga): Thorgi talks about the final boss of the first King of Fighters game, Rugal Berstein, and how difficult he is, which started a tradition within the company of having overpowered final bosses that became known as SNK Boss Syndrome.

Thorgi [The King of Fighter Retrospective (Orochi Saga): Thorgi talks about the final boss of the first King of Fighters game, Rugal Berstein, and how difficult he is, which started a tradition within the company of having overpowered final bosses that became known as SNK Boss Syndrome.