Video Game / The King of Fighters '95 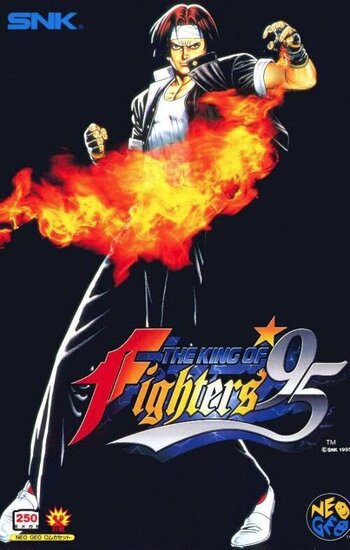 "Announcing the 1995 King of Fighters tournament. The event will be conducted as the previous one, and we welcome both new and old victims - er, teams. Break a spine..."
-R
Advertisement:

After having presumably blown himself up aboard his aircraft carrier in the last game, Rugal Bernstein mysteriously came Back from the Dead, hosting yet another iteration of the KOF tournament, though this time around he's doing it for the sole purpose of seeking revenge against Kyo Kusanagi for his previous defeat from last year. The entire cast of '94 returns to join it, with the exception of the American Sports Team. In their place fills the Rivals Team, a band of bad guys, each holding grudge against one of the heroic teams. Central to this team is a new and intriguing face, Iori Yagami, an enigmatic young man with mysterious powers who sees Kyo as his sworn enemy.

The general gameplay of KOF '95 is about the same as KOF '94, sticking to the 3 Vs. 3 team system, but with lots of bug fixes and improvements that change the speed of match. When your power guage maxes out, you can now perform Guard Cancel by quickly inputing Special Move command while blocking the opponent's attack, giving yourself a chance to counter it. The evasion move is tweaked so that it can be easily linked to a combo. Most importantly, you're able to select individual team members as opposed to the locked-in compositions of the last game.

Besides the AES Neo Geo and the Neo Geo CD ports, KOF '95 was the first game in the series to arrive on mainstream home consoles, releasing for the PlayStation and the Sega Saturn. The Saturn port was bundled with the game-specific RAM cartridge for faster loading. The later Sega Saturn ports would switch to cheaper, universal Extended RAM Cartridge. In addition, Takara developed and released a Game Boy port in 1996, adding Nakoruru from Samurai Shodown.

Advertisement:
Teams for this game