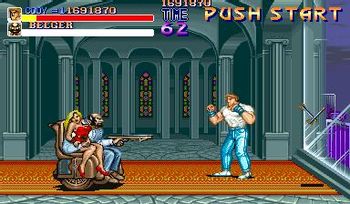 Stained-Glass... Marble Columns... Convenient Picture Window... Struggling Damsel... I think we have a Final Boss, folks.
"This is the Haltmann Works Company's head office. This is the heart of the company. And here you are, as if it was your own living room... You natives need to be taught manners!"
— Susie, Kirby: Planet Robobot
Advertisement:

So, your badass Anti-Hero has just spent the whole night brawling through the dirty, rain-soaked city. The city is empty, the Palette Swap and Underground Monkey gangs have been thrown behind bars, the Quirky Mini Boss Squad has made a hilarious getaway, The Dragon has been reduced to a quivering heap in an alley, and you've eaten more chicken-legs-randomly-found-under-boxes than is probably healthy. It's time to end the reign of terror that has plagued the city once and for all...

Quickly! To the top floor of that luxurious office building!

Although it may seem a little dissonant, plush offices are excellent places for a Final Fight after a long, tough path through the Streets of Rage. It shows that the protagonists have truly made it up into the ivory tower: ready to fight the disease, not just the symptoms. It shows that it's not just the poor, street-level mooks who are getting punished, but also the corruption even in the highest of classes.

Plus, of course, it tends to be an excellent set piece: expensive-looking works of art to throw, leather couches to tumble over, white marble columns to slam heads into, expensive-looking statuary to shred with gunfire in slow-mo, and, of course, the surprisingly easily broken picture window right above a twenty-story drop; that's always fun.