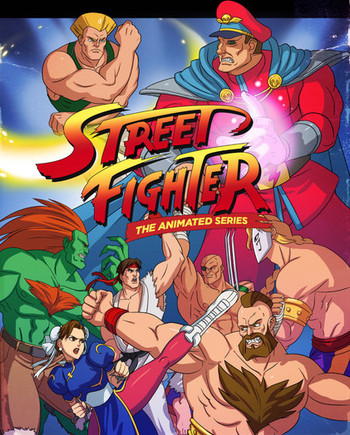 "Colonel William Guile, one of the greatest martial artists in the world, travels the global tournament circuit, using it to conceal his top secret mission as leader of an elite group of international crime fighters, known only by their code name: Street Fighter! The heroic man-beast, Blanka! Hard-kicking fighting machine, Chun-Li! And the team of the most amazing warriors ever seen have joined forces with Guile to combat the criminal empire of Shadaloo and its superhuman leader, Bison. They have their own code of honor: discipline, justice, commitment. And together, they will triumph against the forces of evil. Street Fighter!"
Advertisement:

Street Fighter is an animated series produced by InVision Entertainment based on the Street Fighter series by Capcom. It aired for two seasons on the USA Network from 1995 to 1997.

As the Opening Narration above explains, Guile leads a group of Street Fighters against terrorism, mainly related to Shadaloo. Besides Street Fighter II, the series also contains elements and characters from the live action movie and the first two games in the Street Fighter Alpha series, as well as original characters and situations.

The entire series is available on DVD and is also available for free on Amazon Prime.