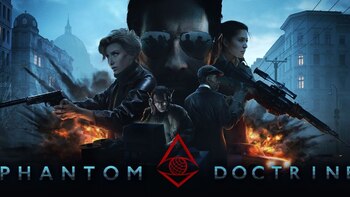 An espionage thriller set in an Alternate History 1980s during the Cold War, where mind control programs such as MKUltra were much more advanced and dangerous. Players take control of a rogue cell codenamed Cabal and must unravel an international conspiracy involving world governments, their leaders, and the invisible puppeteers controlling them all.

The game includes squad and base management, and a strategic world map for controlling agents. Tactical missions are turn-based with similar elements to the XCOM: Enemy Unknown (hand-crafted maps, random enemy placements, varying objectives) but also some key differences, notably the reduced impact of a Random Number Generator.

A trailer can be viewed here

Galaktus Games launched a Kickstarter campaign in 2020 for

The game is due to be followed by a sequel, Phantom Doctrine 2 The Cabal, which was announced in July 2020. Announcement trailer