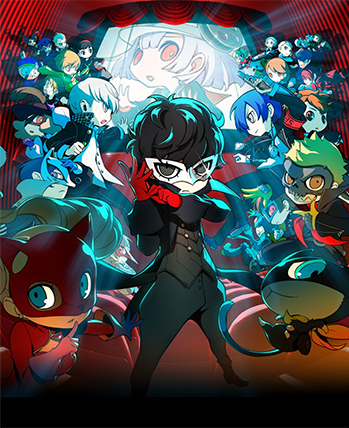 Your life plot written by someone but you!
Beacons of hope,
Had you chosen to halt your steps,
And entrust yourselves to the tranquil dark?
Only you possess the light to awaken those who drift in the abyss.
Now...once more...
Draw from memories passed
And begin your path anew...
— Philemon
Advertisement:

Persona Q2: New Cinema Labyrinth is the Dungeon Crawler sequel to Persona Q: Shadow of the Labyrinth for the Nintendo 3DS. It was released in Japan on November 29th, 2018 as well as in North America and Europe on June 4, 2019. Unlike the previous games of the series, however, there is no English dub for this game.

Like in the first game, design and gameplay are taken directly from the Etrian Odyssey series. Q2 compounds on the original game with new mechanics based on Persona 5's battle system, including the Nuke and Psychokinesis elements as well as the Baton Pass ability. In addition, there is no character selection in this game and the Phantom Thieves are the main focal point.