Not in Kansas Anymore 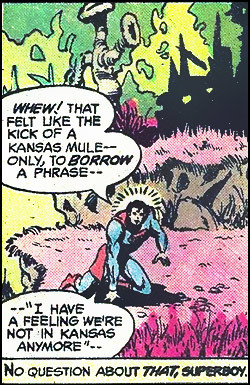 Even the caption is telling Superboy off...
"Where are we?" Asked the Black Knight in Infinity Crusade #1. "Don't look like Kansas to me, Toto," replied Multiple Man. Marvel writers take note: I hereby swear I will hunt down and kill the next one of you who quotes that hackneyed line from The Wizard of Oz.
(Later in the same article)
In Thor Corps #1, Thunderstrike said, "There's an old cliche about not being in Kansas anymore that's too corny for even me to use!" Whew. Close call... that was written by the Chief himself.
— Marvel Year in Review 1993
Advertisement:

A Stock Phrase referencing The Wizard of Oz, used to express the realization that the character is in a completely unfamiliar (or indeed otherworldly) place.

Saying this to a person from Kansas is a good way to get a boot in the ass.

If the characters have actually found themselves in a parody or plot reference to The Wizard of Oz, then they're Off to See the Wizard. If this phrase is used in a setting where Kansas doesn't exist, or at least where characters would have no knowledge of it, it's also a case of Orphaned Etymology.

Note: this line never appears, in any form, in Baum's original 1900 novel.