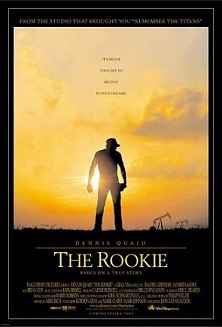 "It's never too late to believe in your dreams."
— Tagline
Advertisement:

The Rookie is a 2002 film directed by John Lee Hancock, written by Mike Rich and featuring Dennis Quaid as real-life former pitcher Jim Morris who began his pitching career at the late age of 35 for the Tampa Bay Devil Rays. Morris, a high-school chemistry teacher and baseball coach when the movie opens, is a former Major League baseball prospect whose injuries sidelined him. In an effort to inspire his team to victory, Morris makes a bet stating he will try again to make it into the Majors if his team wins Regionals. So when they do just that, Morris has no choice but to keep his end of the bargain and pursue his dream. Along the way, Morris must come to terms with his past life and an non-supportive father who never appreciated his ambitions.

Not to be confused with the 1990 film by Clint Eastwood of the same name.