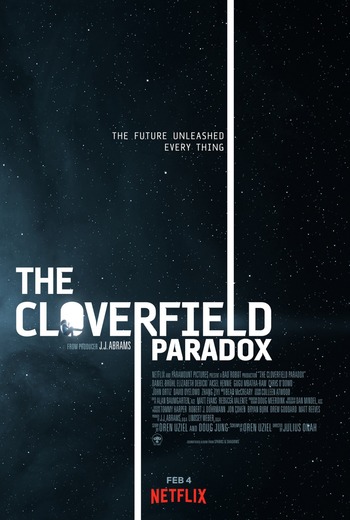 10 years ago, some thing arrived.
Now find out why.
Advertisement:

The Cloverfield Paradox is a 2018 sci-fi horror film, directed by Julius Onan, written by Oren Uziel & Doug Jung, and produced (as always) by J. J. Abrams.

It is the third installment of the Cloverfield series, following 2008's Cloverfield and 2016's 10 Cloverfield Lane, and serves as a hypothetical sequel to both. In a first for the franchise, it was distributed internationally by Netflix on February 4th, 2018, mere hours after its first trailer dropped.

A fourth Cloverfield film, which is to be written by Joe Barton

The Cloverfield Paradox provides examples of: