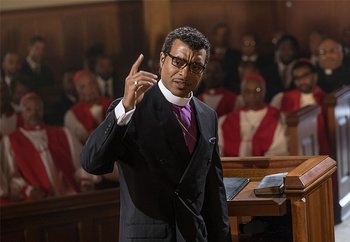 A heresy trial by any other name...
Come Sunday is a film produced by This American Life based on a true story that the radio show first reported about a successful Pentecostal bishop who gets into hot water when he dissents from the traditional doctrine of eternal damnation.
Advertisement:

It's 1998, and Carlton Pearson (Chiwetel Ejiofor) is leading a fulfilling, if hectic, life running a multiracial Tulsa megachurch while jetting around the country to save souls. However, he's starting to feel overwhelmed by the project: his imprisoned uncle Quincy (Danny Glover) commits suicide, his organist Reggie (Lakeith Stanfield) is struggling with his homosexuality, and finally he sees a TV report on the genocide in Rwanda, leading him to wonder if all those non-Christian children are really going straight to hell after being brutally murdered. He prays and hears the voice of God telling him that no, those people aren't going to hell because Jesus' sacrifice saved everyone already. When he shares this at church, however, this leads to a split in the congregation as well as a breach in Pearson's relationships, including with his mentor Oral Roberts (Martin Sheen), who believes that Pearson actually heard the voice of the other guy.

First seen at Sundance, the film was released on Netflix in 2018.