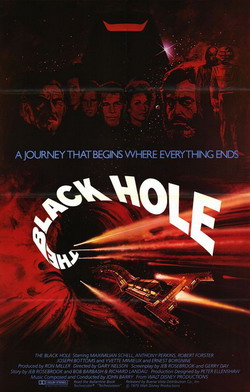 The Black Hole is a 1979 science fiction movie directed by Gary Nelson. It stars Maximilian Schell, Robert Forster, Joseph Bottoms, Yvette Mimieux, Anthony Perkins, and Ernest Borgnine. The voices of the main robot characters in the film are provided by Roddy McDowall and Slim Pickens (both uncredited). The music for the movie was composed by John Barry. Alan Dean Foster novelized the screenplay.

An Earth exploratory ship, the USS Palomino, discovers an impressively massive black hole with a missing Earth vessel, the USS Cygnus parked just outside its event horizon, somehow defying its gravity. Setting off to solve the mystery of the Cygnus are: the Palomino's Captain, Dan Holland (Forster); his First Officer, Lieutenant Charlie Pizer (Bottoms); journalist Harry Booth (Borgnine); ESP-sensitive scientist Dr. Kate McCrae (Mimieux); Dr. Alex Durant (Perkins), the expedition's civilian leader; and the robot V.I.N.CENT("Vital Information Necessary CENTralized"). The Palomino attempts a dangerous fly-by of the ship, which is dark and apparently derelict. As they come within close range of it, the buffeting they experience due to the black hole's gravity suddenly ceases. They complete their fly-by with tantalizing signs that someone may still be aboard, but do not realize the gravity-free zone is artificial and limited; slipping outside it, they are almost drawn into the black hole.

As the crew repairs the Palomino, they discover that the Cygnus is not only functional but inhabited by a crew of faceless robots and their human commander, Dr. Hans Reinhardt, who intends to take the Cygnus into the black hole to see what awaits him on the other side. Trivial matters like what happened to the original human crew or that Earth tried to recall his mission years ago do not concern him.

Oh, did we forget to mention this is a Disney movie?

The movie contains very clear homages in style and plot to 2001: A Space Odyssey and Forbidden Planet, and to the studio's own prior 20,000 Leagues Under the Sea; it's possible they originally intended to create a similar "proverbial good science fiction film". The success of Star Wars meant that assorted cute robots and laser battles were crammed in, making the tone somewhat schizophrenic. The goofy robot shooting gallery scene seems particularly out of place.note It was originally a pool-shooting scene, and is considerably less goofy in the novelization

Many consider this film to be Disney's biggest flopnote at least until The Lone Ranger (2013) came along (which led to countless jokes about the company's money being tossed into the eponymous hole), and that it represents everything that was wrong with Ron Miller's leadership of the company. In actual fact, it made $35m on a budget of $20m, so it did earn a slight profit for the company; nonetheless, not very many people regard the film as one of Disney's finer moments. (However, it is considered a science fiction classic and is often cited alongside Blade Runner and TRON as examples of films that failed upon first release only to be critically reappraised and become cult favorites later on.) On the plus side, along with one other movie that was released the same year, it was the first ever Disney movie to be given a PG rating; something that ultimately would lead to the creation of Disney's separate non-Disney branded label, Touchstone Pictures in 1984 (with the PG-rated Splash as its first release). The film in theatrical release was released under the Buena Vista label, and nowhere on the posters or promotional material did "Disney" appear, a first for any Disney film. (Nowadays, the title is Disney's The Black Hole.)

The film is currently in development for a remake by TRON: Legacy director Joseph Kosinski. This film even gets a Shout-Out in Legacy as a poster in Sam's room.