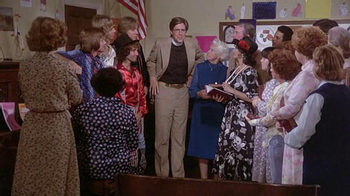 Rev. Hill addresses the Irregulars
Released by Disney in 1979, this is a Disneyfication (naturally) of Reverend Albert Fay Hill's Real Life story.
Advertisement:

Reverend Michael Hill and his two children, a boy and a girl (but no baby), have just moved to the town of New Campton, where the reverend takes over as the pastor for North Avenue Presbyterian Church. The reverend has big plans for the church and almost immediately asks Rose Rafferty, one of the church ladies, to watch over all the money in the kitty. Right before his first sermon, Rev. Hill learns that all the money is gone and Rafferty's husband lost it on a horse. The reverend then gives what is likely the shortest sermon in the church's history, he and the church lady hop on his motorcycle, and they go to see the husband's bookie in hopes of getting the money back. Rev. Hill is quickly ushered out the back door instead and the bookie joint has disappeared by the time he returns with the police. Infuriated, Rev. Hill starts using his televised sermons to go after The Mafia himself.

Instead of Rev. Hill taking evidence to Treasury agents himself, they come to him when they hear one of his televised sermons on New Campton's gambling problem. They want the male parishioners to help them take down the local gambling racket but, as what happened in real life, they all think it's a good idea but are afraid of getting involved. Also as what happened in real life, the T-Men are reluctant to have the women help. But the women are their only option so they are allowed to help, with similarly disastrous results and, again, they're forced to follow the money.