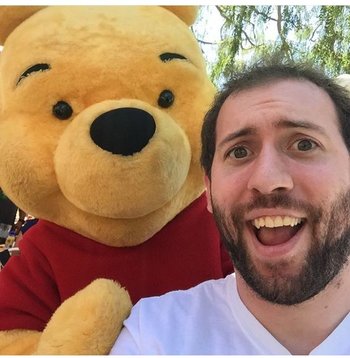 A lovable, somewhat childish creature — and Winnie the Pooh.

"Hey guys, and welcome to my TV Tropes page..."

Wade Barnes (born April 3, 1989), known by his YouTube alias LordMinion777, is an Ohio-based Let's Player who began his YouTube career alongside best friends Markiplier and Bob "Muyskerm" Muyskens. Wade is a jokester who specializes primarily in survival, horror and indie games; however, he first got recognition as a main guest in Markiplier's Drunk Minecraft series of videos. Since then, he has slowly expanded his fanbase, and currently has 1.3 million subscribers. Wade is married to fellow YouTuber FoxTrot44 and his most frequent collaborators aside from Mark and his group are "Dem Salty Boys" (JPW03, PatrckStatic, and Garuku Bluemoon); he's also collaborated with JackSepticEye, Pewdiepie, Mangaminx, Dlive22891, EntoanThePack, ZombieMold (the admin of the server where they filmed Drunk Minecraft), and BreadHeroDan.

Wade and his videos and collaborators provide examples of: