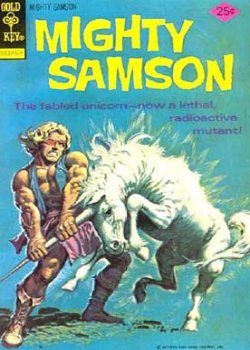 Gold Key Comics began in 1962, although the history extends back further. Western Publishing and Lithography (better known as the creator of Golden Books) had published some comics under the Whitman imprint in the 1930s, then in 1935 Dell Publishing contracted and distributed comics from Western as Dell Comics. This ended in 1962, an event known as "the divorce", when Dell and Western went their separate ways.

Ownership of most of the original titles, as well as most of the licensing agreements, were with Western and not Dell, so Western created the Gold Key imprint and continued publishing its own comics.

Gold Key's comics always stood out from their competitors on the stand due to the frequent use of painted covers. The cover art was usually reproduced in "pin-up" style (i.e., without logos and cover text) on the back cover.

In the 1970s and 1980s, the Whitman imprint began appearing on Gold Key titles, and the company stopped publishing in the 1980s.

Several of Gold Key's original properties (Dr. Solar, Magnus and Turok) were sold to Valiant Comics in the 1990s, and have more recently reappeared in Dark Horse Comics. In 2013, it was announced that these properties would be published by Dynamite Comics.

Gold Key comics with their own trope pages include: