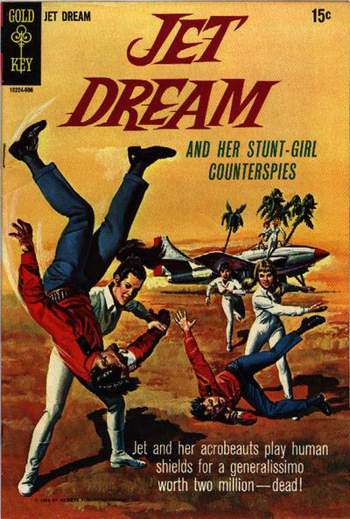 The Jet Dream feature first appeared in Gold Key Comics' The Man from U.N.C.L.E. Comic-Book Adaptation, between July 1966 and April 1969 (cover dates.) The opposite of DecompressedComics, each of these 16 stories was a mere four pages in length. (Other than sharing a book and an espionage theme, Jet Dream and The Man From UNCLE were completely unrelated.) In June 1968 (cover date), the first and only issue of Jet Dream's own title, with a full-length story, appeared.

The series premise appears to have been strongly influenced by both Blackhawk and the Pussy Galore character in Goldfinger, who had an all-female "Flying Circus." Likewise, the "Stunt-Girl Counterspies" were a team of female fliers and spies, but fighting for the good guys (while also, for reasons never adequately explained, working "day jobs" as Hollywood stuntwomen.)

The members of the Jet Dream Team were (as described in Jet Dream #1):

The feature provides the primary source material for the Remix Comic Jet Dream and Her T-Girl Counterspies.